Kelly Clarkson became the latest singer to take on Carpool Karaoke, and as always, she sounded incredible.

The singer understandably belted out some of her biggest hits – including "Since U Been Gone" and "Because of You" – as she helped James Corden get to work.

There were a few revealing questions along the way too, with Kelly notably revealing that when she was young she wanted to be a marine biologist.

"You know who else wanted to be a marine biologist? Seal," James then joked, although it took Kelly a little while to get it.

However, the best part came as the pair discussed her marriage to Brandon Blackstock, who also acts as her manager.

As James asked about the time they get to spend together outside of work, the presenter surprised Kelly with a date night with Brandon ... in the back of the car!

Sure enough, a table and romantic dinner was set up in the backseat as Brandon joined the pair, alongside a woman playing a romantic tune on a violin.

It didn't help that two other people were in the car alongside the couple. We guess it's the thought that counts, right?

Kelly recently released her comeback album Meaning of Life, her eighth studio album led by the single "Love So Soft."

A few weeks ago, Pink took on Carpool Karaoke and ended up singing upside down with James. All in a day's work! 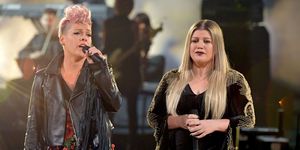 Pink and Kelly Clarkson Duet at the AMAs

This content is created and maintained by a third party, and imported onto this page to help users provide their email addresses. You may be able to find more information about this and similar content at piano.io
Advertisement - Continue Reading Below
More From About
What's Open and Closed on Presidents' Day 2021?
Macy's Thanksgiving Parade 2020 Will Be TV Only
Advertisement - Continue Reading Below
Beyoncé's Strapless Velvet Gown Has a Leg Slit
This Sneaker Photo Is Going Viral for a New Reason
Have Tea With Sheep With Airbnb's New Program
Answers to Fair Games September 2019
Contact Us
People Are Raving About This Sherpa Blanket
Advertise Online
'Toy Story 4' Finally Has a Release Date